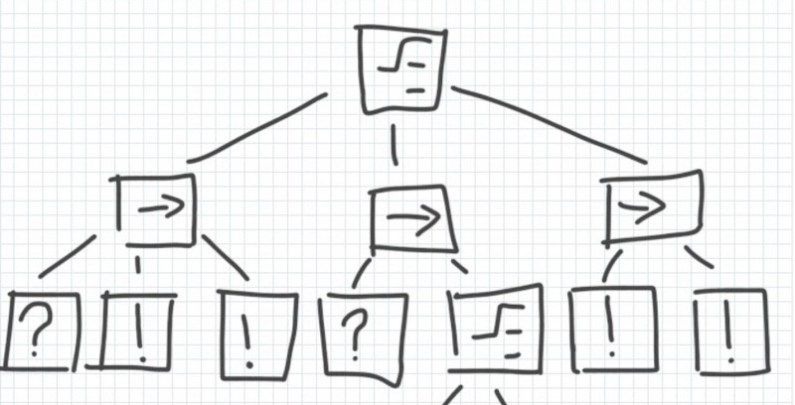 👴 This article is about a discontinued version of Craft AI, some information may not reflect what Craft AI can currently do! For more up to date reading, check our blog and do not hesitate to visit our website.

Behavior Trees (BT) are a formalism used to describe tasks and their switching in a modular fashion. They were first introduced in the game industry around 2004/2005, most notably for Halo 2 by Damian Isla and Façade by Andrew Stern and Michael Mateas; both building upon prior works in the field of robotics and intelligent virtual agents. The main motivations were to create a language that would be:

They are now used frequently to implement Non Playable Characters (NPC) Artificial Intelligence (AI) in all kind of games and simulations and have evolved quite a bit since. Craft AI is part of this evolution, using BTs as a component of its intelligent automation engine. We want to apply the nice properties of BTs to a wide range of fields such as the connected devices, robots, personal assistants, and generally all apps requiring contextual and personalized decision-making.

This post is the first of a series that will focus on studying BTs, as used, for example, inside Craft AI... For now our goal is to introduce the basics of BTs: what their basic building blocks are, what their main properties are. Without further ado, let’s dive in!

Let’s start by taking a look at the general structure of a BT. Like everyone - yes even you - have guessed, they’re trees, more precisely directed rooted trees, one root, directed edges, no cycles. Most of the time BTs are represented from the root, from top to bottom. As the order of a node’s children has a meaning, they are usually horizontally aligned with the leftmost being considered the first child and the rightmost - you got it - the last one.

Each leaf node of the tree represents an atomic task that can be executed directly. Nodes that have children represent tasks composed of their children.

During the execution each node can be in one of several states:

Success and failure represent functional states, the latter does not necessarily mean an error occured. Let’s say we have a node representing the retrieval of HBO’s Game Of Thrones episode without any gruesome death; it will probably find none which can be a case for a failure, but it is not an error.

The execution of a BT is based on discrete updates, each performing a single depth-first traversal of the tree recursively from the root. Each node computes its state during traversal, and if it has children it defines how they are to be traversed. Most of the time children are traversed from left to right until a child reaches a given state. In most implementations, among them Craft AI’s, nodes belong to a few different generic types that form the basic grammar of BTs. A node’s type defines how its children are traversed and how its state is computed. With only a few different types the expressive power is already large while the traversal is kept understandable. In the following section we’ll explore the main elements of this grammar.

The sequence node executes its children sequentially - yes, it’s mindblowing - until all succeed. The traversal starts from the first child and proceeds to the following one until a child becomes running or ends in failure. In the first case, reaching a running child, the traversal is stopped in the running state and will resume during the following traversal. In the second case, reaching a failed child, the traversal ends and the sequence fails. When the last child succeeds, the sequence ends in success. In practice the sequence behaves like a lazily evaluated boolean and.

The figure illustrates two consecutive traversals of a sequence. Traversal 1 goes as follows:

If the third child had succeeded, the sequence would have succeeded too.

Contrary to the sequence, the selector is often found with a range of slightly different variations. The basic version described above orders its children statically from left to right, but it is possible to make this ordering dynamic, based on utility functions for example. Once each child is assigned a utility, the selector can either use these to order the children as above, or use a probability pick: the higher utility the most likely a child is to be picked.

The condition node allows to use simple predicates in the tree. If the predicate is true the node succeeds, otherwise it fails. This node is very important in various BT patterns, for example as the first child in a sequence it will act as a precondition.

In Craft AI’s BT implementation, the condition node can also take a single child that will be executed only if the predicate is true, in which case the condition node takes the state of its child. This proves to be a nice shortcut to execute a node while a condition is met.

The action node is the last of the big four. Its role is to interface with other systems triggering movements, sounds, sensor information retrievals, database updates, … Action nodes manage the execution of actions, which are, basically, callbacks to the targeted system.

When the action node becomes running, it schedules the asynchronous execution of its action. The node stays in the running state until the action finishes, at which point it succeeds or fails according to the result of the action. If during a tree traversal the action node is not traversed, for example when an active selector is used, the execution of the action is cancelled, thus allowing the graceful handling of interruptions.

These four nodes are the core of the BT grammar. But given the four node states and the recursive traversal algorithm, it is pretty simple to imagine a range of additional nodes. Some of them are fairly common such as the parallel node that will traverse all its children in a single step, thus allowing more than one of its children to be running at the same time. Some other nodes are very specific; Craft AI, for example, provides helper nodes to manipulate the knowledge and messaging subsystems.

In future posts we will delve deeper into BTs, first to give you an overview of their successful use mainly in the game industry, and also to get a firmer grasp on their benefits over other methods such as Business Process Model and Notation (BPMN) or plain code.

In the meantime you can follow Craft AI on Twitter, or LinkedIn; we also have a newsletter whose first issue was released last week.

Edit 29/6/2015: Following an interesting discussion on Twitter the section about the origins of BT was expanded; we'll talk more about their history in a future post.